Back in 2006, I recognized the benefit of a Software that could present Bible verses in English and Malayalam on the same screen. Since then I have developed different versions of the software to arrive at the current version of VerseVIEW. The software architecture supports multiple versions of the Bible.

This started as a small tool for my church (PPCD) but now benefits several churches, ministries and individuals around the world. VerseVIEW 3.0 is free and available to be used for the Glory of God. 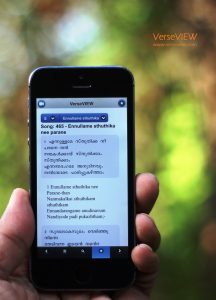 2012: Mr. Abraham George from Doha, Qatar created the lyrics database for Malayalam and Hindi songs along with the English transliteration for VerseVIEW.

2013: Mr. Jaimon Kuriakose from Thrissur, India started supporting VerseVIEW with some of the graphics work for VerseVIEW

Oct 2014: Crossed 50,000 downloads on the VerseVIEW Mobile Bible for Android

Sept 2017: Started the effort to compile chord progression for all the common Malayalam songs and released the Songbook web application with music chords.

July 2018: Released Songbook application with much chords for Android

May 2021: Released VerseVIEW 8.0 with chords feature and auto transliteration feature for Malayalam